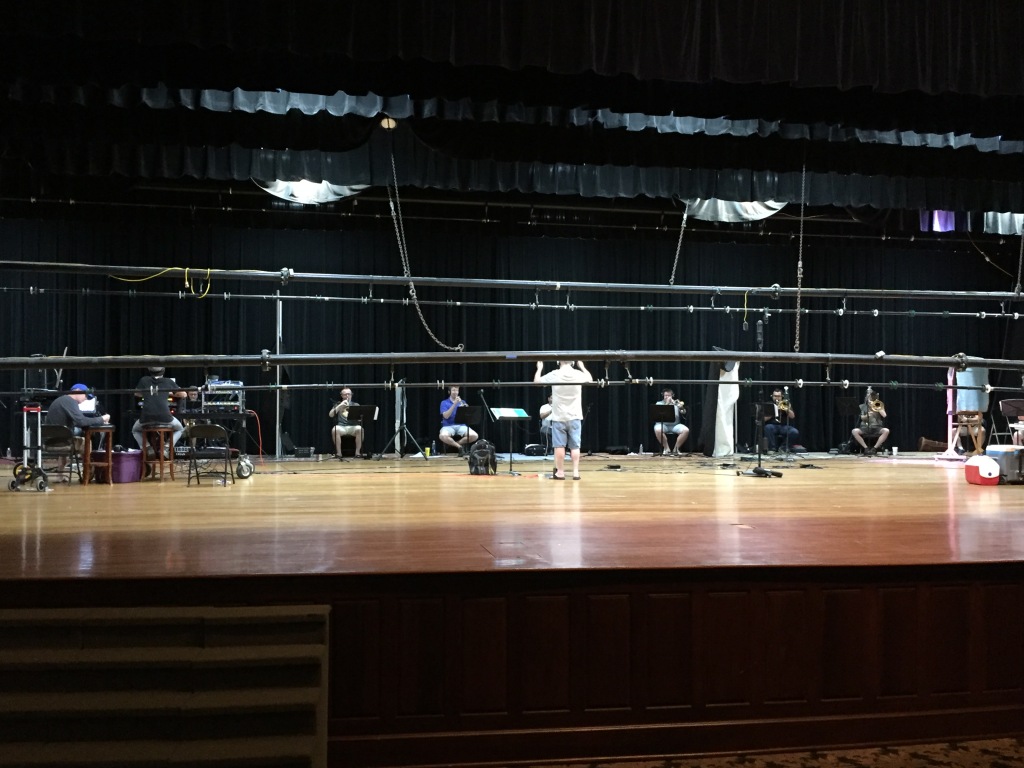 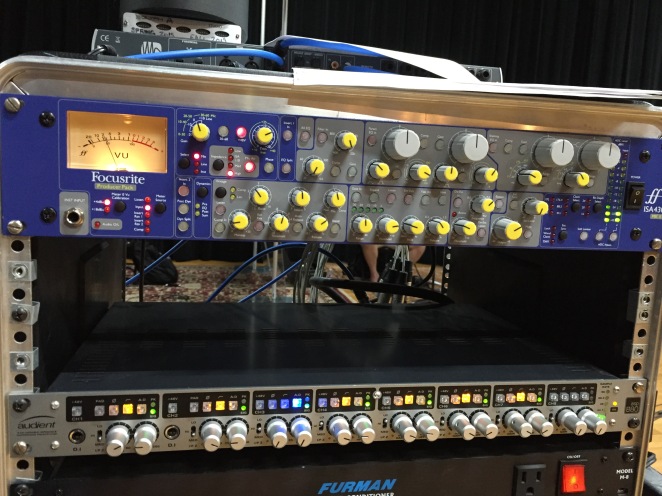 The Focusrite ISA 430 feeds the flute into the Audient ASP 880 on channel 3, bypassing the mic pre via the handy DB25 inputs so as to access the outstanding Burr-Brown AD converters directly! Good thinking, Audient!

Once a year MSU Recording Services gets to participate in a special “horns only” recording session. Marching band is a pretty big deal here in the States; there are thousands of high schools fielding marching bands, and they all need new music and drill every year. Many band directors prefer to purchase fresh and appropriately-licensed arrangements from a reputable source. That’s where John Fannin of Fannin Musical Productions comes in. John’s business provides dozens of unique arrangements, marching drill, sound effect packages, and even commissioned pieces to high school bands. He makes shopping extra easy by mailing an annual CD of his latest offerings to every public high school band director in America. That’s about 15,000 copies! 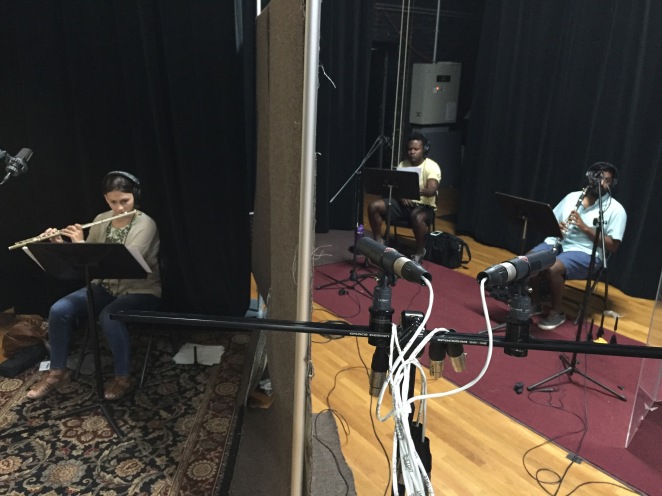 The Neumann KM-184s in ORTF capturing the woodwind section

John’s clients seem to prefer live wind instrument recordings to libraries, so once a year John rounds up some winds. One flute, two clarinets, two saxophones, a mellophone, three trumpets, two trombones, a euphonium, and a tuba make up the ensemble. John does it right, too. He starts with killer players. Most have either a master’s or a doctoral degree in their respective instruments. There may only be 13 of them, but when those 13 are all ultra-competitive professionals… watch out! They also stack takes, which gives the effect of 26 professional players (or probably more like 75 typical high school musicians as far as wind power is concerned). Alas, the percussion must remain MIDI as it would more than double the time and cost to make a live drum line recording in advance of the wind session.

A session with 13 wind players requires a big space. The stage of Lovett Auditorium doubled as a basketball court back in the 1920’s, and this huge soundstage-like venue allows for 11 players to be spaced at 6 feet apart in one big line. The last two players had spots just in front of the bookend players. The big room and tall ceiling helped reduce the intensity of early reflections, and this made for a much better recording environment than the typical band room. 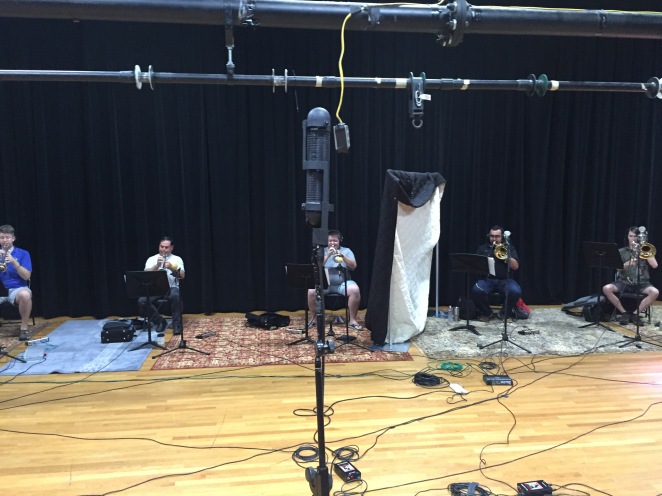 Woodwinds took up one side of the stage and brass the other. A stereo ribbon mic (AEA’s R88) functioned as the brass ensemble microphone, while a pair of Neumann KM-184s in ORTF stereo captured the woodwinds. The AEA ribbon is a terrific room/ensemble mic and adds a sense of space and warmth that is tough to get with anything else. The crossed figure-8 pattern probably has a lot to do with that. The KM-184s are just great all around acoustic ensemble mics and worked well within 15 feet of the woodwinds; the cardioid patterns helping to isolate the weaker signal of the flute, clarinets and saxes. Baffles provided a little more isolation between instrument types, and everyone got a spot mic. 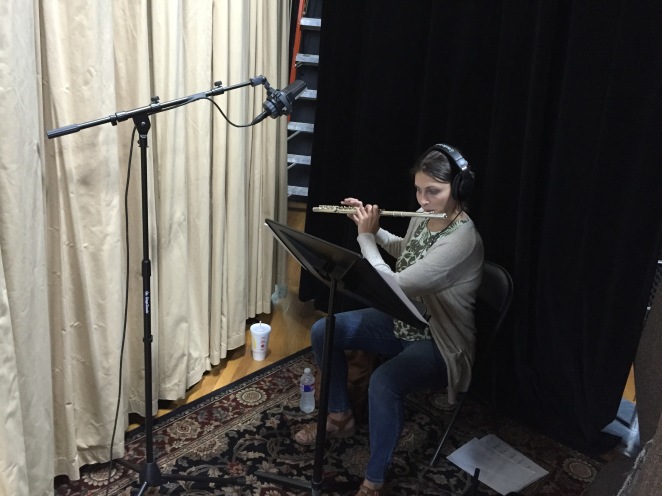 The flute cave with the AKG C414 XLS on duty

The flute was probably the most isolated instrument – placed between theater curtains and baffling – with an AKG C414 XLS about 2 feet away in the hypercardioid pattern. The C414 is a classic instrument microphone, with the XLS version often considered more appropriate for instruments (the XLII version is a bit brighter which some consider a boon for vocals). We only had one, so this is where it sat – running through a Focusrite 430 Producer Pack channel strip (which we count as one of our 5 “boutique” signal paths). The Focusrite mic pre has some great characteristics: quiet, solid and just a little bit of color. 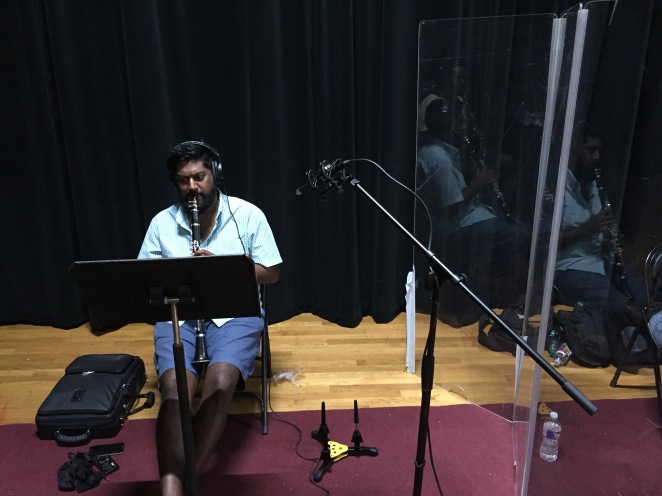 Both clarinets were recorded with sE Electronic’s RN17 (as in Rupert Neve) small diaphragm condenser mics with the cardioid capsules. These mics are among the more forgiving small diaphragm condensers. I credit the giant Neve transformers with providing some subtle flattery. I have heard some people compare the sound of these to the pricier Schoeps SDCs, but I can’t comment myself having never used Schoeps. I do know that I’d worry more about using a KM-184 this close to a bright-ish, potentially harsh-ish source. But the sE’s sound a little less edgy. They ran into the stock Apogee Ensemble mic pres. 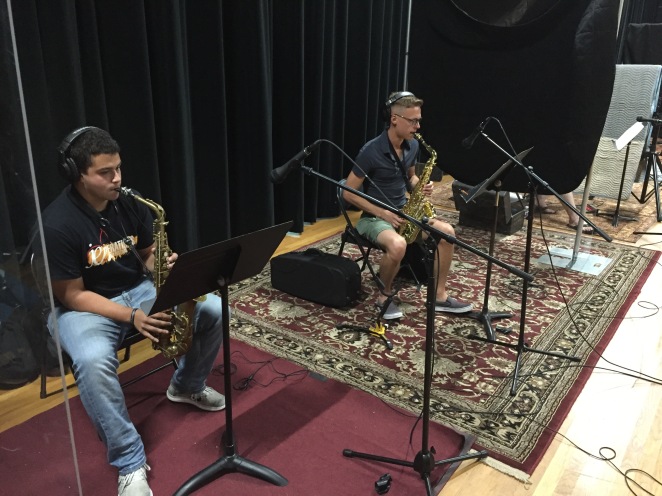 These mics don’t look like anything special, but the Miktek PM9s are actually super cool supercardioid dynamic mics. You can easily hear the improvement over the standard stage dynamic mics!

Saxophones were treated to the Miktek PM9 supercardioid dynamic mic. This mic is primarily a vocal microphone in the vein of the Shure SM58, but with a bit more top end over 10 kHz. They also seem to have a slightly less congested sound than the SM58. Of course, they are twice the price. I’d put their sound halfway between the SM58 and the SM87 – Shure’s condenser handheld (but with a smoother top end). The saxes also ran through the Apogee pres. 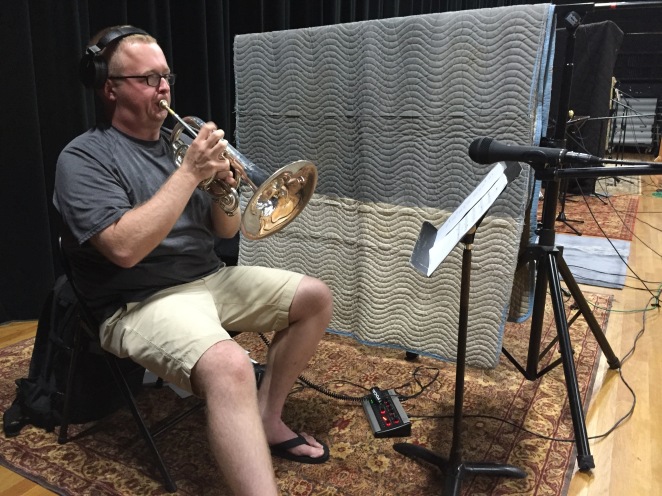 The Miktek PM9 made me wish I had some of their LDCs to sample!

The mellophone also received the PM9 effect, just off-axis a bit and through an Audient ASP 880 preamp. The Audient pre, by the way, is a nice analog preamp utilizing discrete circuits as opposed to the more common integrated circuit design found in less expensive gear. There will always be those who swear by discrete circuits, and the ASP 880 will definitely satisfy those folks! More on the ASP 880 in the next block… 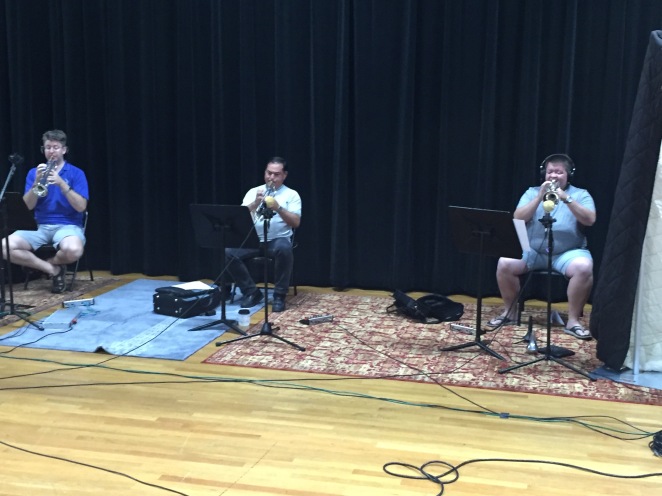 Cascade Fathead II mics on the right; a Shure SM7b on the left, and trumpets straight across.

The Audient mic pre has variable impedance settings on all 8 channels, and with passive ribbon mics that can make a big sonic difference. We used the lowest impedance setting to get the warmest, smeariest sound for trumpet! The two fellows on the right are using the passive Cascade Fathead II ribbon mics. And yes, they are fat-sounding. You may notice the player on the far right is on-axis and blowing right into the mic (it actually is farther away than it appears in the photo). This would usually be a bad position for a condenser mic, but the Fathead really rolls the edge off. It sounded great both on and off axis. And being ribbon mics, the figure-8 pattern helped to reject the sounds to the left and right. Nice bonus. The player to the far left is using a Shure SM7b. Compared to the ribbon mics, it was pretty thin sounding. But with three trumpet parts, you don’t necessarily need all of them to have big bottoms. 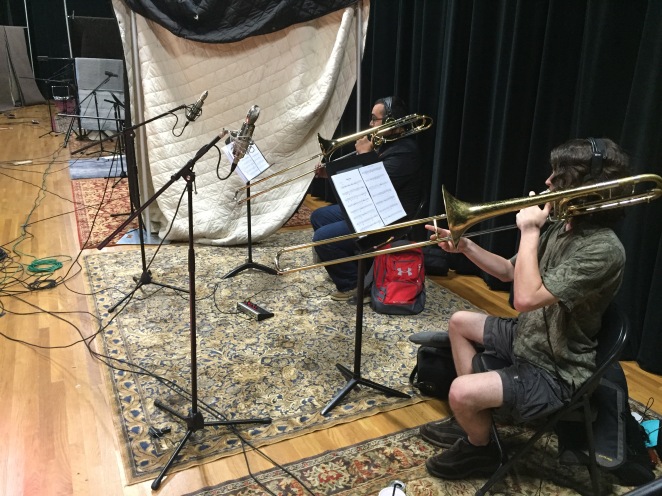 The M-Audio Sputnik tube LDCs are pretty to look at and pretty to listen to on a lot of different sources.

I was torn about where to use the Fatheads. I thought I might like to try them on the trombones, but I eventually decided my best bet was to put them on the brightest source. So the bones got miked with even pricier pieces: the M-Audio Sputnik large diaphragm tube condensers. The M-Audio tube mics never really caught on that big among the audio masses, but fans of the mic are very devoted. I’ve compared the Sputnik with other mics (like the AKG C414) and found they more than hold their own. In fact, in blind vocal tests, singers prefer the Sputnik just about every time vs the C414 XLS! These were a couple of feet back and up / off-axis a bit running through a Millennia Media HV-3D (our other “boutique” 4-channel signal path). The Millennia is popular with classical and jazz producers for its natural, uncolored sound. Some percussionists like to use it for its quick transient capture on drum kit. The combination of Sputnik and Millennia definitely provided nice clarity and power for the low end. 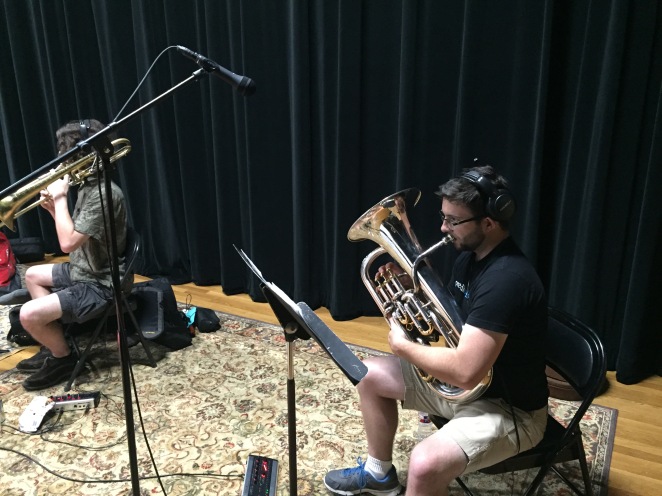 A Miktek PM9 was set up off-axis and a few feet back from the euphonium. This also ran through the Millennia HV-3D. The euphonium is like a little tuba – extra warmth to help round out the trombones! 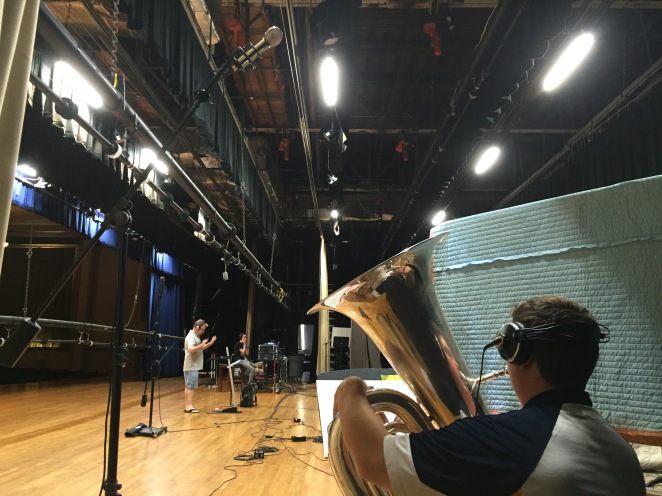 And last but not least, the tuba enjoyed a Sputnik tube LDC four feet above and only slightly off-axis going through the Millennia HV-3D. The extra distance on the tuba mic really helped the sound develop to feel big and fat! I wish I had a tube preamp to try out with the tuba, but there are plenty of plugins I can try out during mix down if I want to get more tube-y than the Sputnik itself.

This was my first session with the Behringer P16-M personal monitor system. Everyone got to dial in their own headphone mix (just the click track and MIDI mix). As one who has always used a single mix via the old-school headphone distributors, I have to say it’s wonderful to leave the headphone adjustments up to the individual players rather than try to be the sole intermediary for 13 people! When the players can adjust their own phones, they seem to end up a lot happier. Too often players compromise on their headphone mix when they’re stuck with only one mix option (or when they feel dependent on an engineer who has a million other things to deal with). You get better performances from happy musicians who can hear things just they way they want, and we all agreed the personal monitor system was an improvement that was well worth the price. 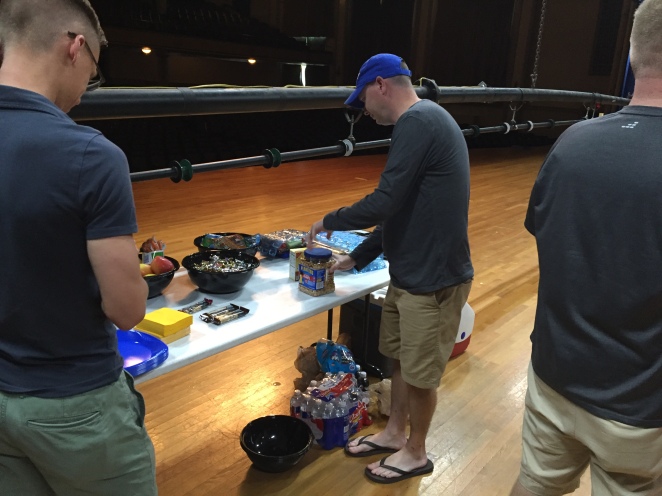 Break time – thanks John! But only for 5 minutes (…slave driver!)

We spent 8 hours the day before just setting up the space, line-checking and making sure things were working. Everything went pretty smoothly with the exception of the headphone outputs on the Ensemble. I had intended to have John and myself monitor off of those, but I failed to realize that by setting up the multi-mix phones for the musicians, I had rendered the Ensemble headphone outputs somewhat handicapped: one was click only and the other was MIDI only. Whoops. I had hoped the Behringer Personal Mixer system would eliminate my need for a headphone distribution amp, but since the director sorta needed to hear everything too, I patched a distribution amp into one of the P16-Ms for a grand total of 20 headphone outputs!

Even though we were recording marching band arrangements, I didn’t necessarily want to achieve an authentic “marching band sound.” Marching bands perform outside on a football field, after all. I approached things with a little bit of classical sensibility, hoping to get better-than-marching-band tonal quality. Sort of like a big chamber wind band, except that everyone got their own mic, too.

I rarely use spot mics for the classical recording I do. Not that spot mics would never help, but the extra work to payoff ratio isn’t usually enough to persuade me. Not to mention that most of my classical recording is done live anyway. That’s why a session like this one is a lot of fun, because it is so different. It’s always good to get creative while matching mics, mic pres and sources, and this session provided one of the widest varieties of sources ever!

Sessions like this are also great for MSU’s music business students. Fresh off a summer internship at a recording studio, our new intern for Fall 2016, Brandon Gleason, was primed to help out. In fact, he ran about half the session while I took the fine photos you’ve been enjoying. Feeling the pressure of a dozen people waiting for your every mouse-click is a good test for aspiring engineers!

Next up: editing out the bad stuff, mixing, and sending things off to the high schools! Long live marching band! 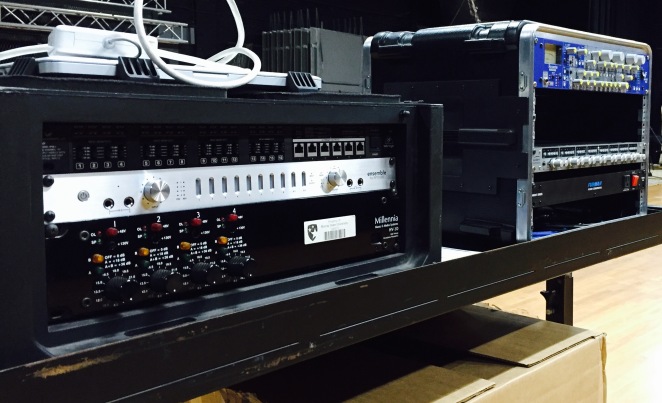